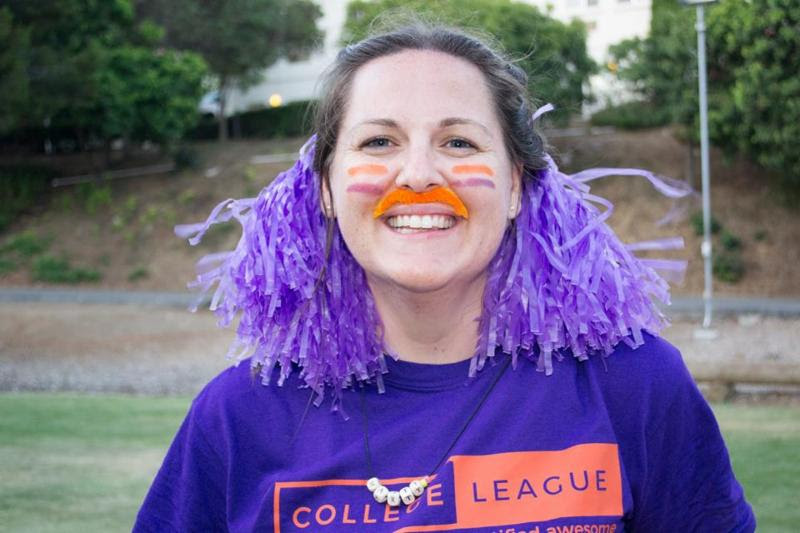 Marty has been a volunteer since 2016, and is looking forward to returning to our California (CalEx) camp for summer 2019. Thank you Marty for always making everyone smile, and for your infectious, amazing energy.

I can still remember my first day of CalEx Camp like it was yesterday.  As I drove into the parking lot I was terrified and had no idea what to expect.  The friend who had got me involved ended up having to drop out last minute due to work, so I didn’t know a single soul.  I had flashbacks to the first day of school, nervous that everyone was already friends and that I would be the odd man out.  However, nothing could have been further from the truth as the group of volunteers and staff were some of the most welcoming and open hearted people I had ever met.

That first year I had a bunk of mostly new campers, eight 14-year-old girls to be exact. As you can guess, sitting around and opening up about their feelings was not high on their list.  During our first grief activity that day, my co-counselors and I did most of the talking, hoping to make the girls feel more comfortable. As the week went on the girls started to open up more and come out of their shells.

At the final bonfire at the end of the week the girls go up by bunks and can talk about what camp meant to them. It’s completely optional, but most girls like to share.  My co-counselors and I didn’t think the chance of anyone speaking from our bunk was high, though they had started to open up with us. Speaking in front of the entire camp seemed like it might be too daunting.  We were pleasantly surprised when the quietest girl in our bunk, someone who had traveled from the other side of the country and had never been to any kind of camp before, grabbed the mic and said how thankful she was for camp.  Like a proud bunk mama, I felt my heart swell with pride. I realized in that moment that this is the power of Experience Camps. It brings us all together and makes us feel a little less alone, and helps us find that courage that we didn’t know we had.

I lost my father from a heart attack when I was 22 years old and at 30 I thought I had really dealt with it, but that week and those kids healed something in me that I had no idea still needed to be healed.  Through tears during circle time, to screaming at the top of my lungs during college league, to laughing til my stomach hurt with my bunk, to the impromptu dance parties, I felt myself change. Their strength and tenacity rubbed off and it’s something I think about throughout the year when I take on any sort of new challenge.

I head back this summer for my 4th year at camp, and will be the Unit Leader for the Upper Camp.  I’m affectionately called Pool PartyMarty. It’s the best! Seeing the same girls come back year after year and watching them grow into fierce, amazing, young women has made me one proud bunk mama.

Brie has been with Experience Camps for 5 years but she is no stranger to grief organizations. Read more about her story.

Julia, whose dad died when she was younger, watched the new movie Onward and shared her thoughts with us.

A camp girl at heart, Beth has made an amazing addition to the volunteer program at our Michigan camp.

We knew 2020 felt a bit like a marathon, but we didn't know people would take that literally.