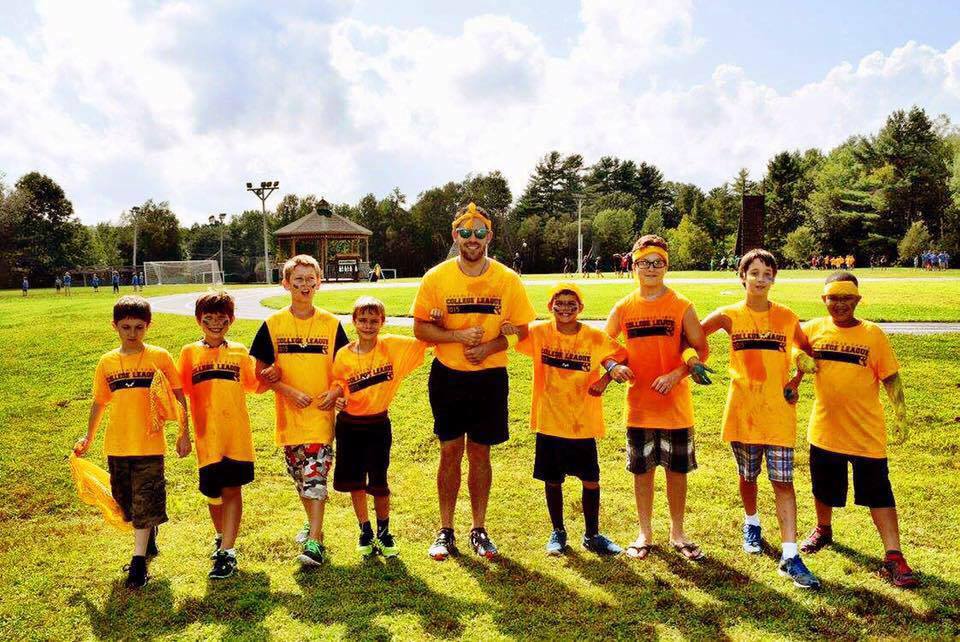 What’s the Deal with College League?

If you survey our campers on what their favorite activity at camp is (and we have), 9 out of 10 will say College League. It is loud, high-energy, competitive and a great deal of fun. But underneath the face paint and psych moves, there’s much more to it.

For those that are new to this concept, College League is a week-long competition between 2 or 4 teams (depending on the size of the camp), named after colleges and lead by a “Dean” who is a volunteer. Most afternoons, teams compete in different activities for points that are tallied up to declare a winner at the end of the week. It’s kind of a big deal.

Soon after the campers arrive at camp, they are gathered together for the “College League break”. This looks a little different each year and at each camp, but it’s essentially when each camper and volunteer is called out onto his or her team for the week. This usually involves costumes, loud music, a lot of cheering, and sometimes a backflip. The Deans make their surprise entrances in all sorts of creative ways. One year, a Dean was lowered down through a doorway on a forklift.

Throughout the week, College League is the vehicle for a lot of good stuff. The teams are made up of all ages, so younger campers are able to look up to the older campers, and older campers are able to model the values of the team as leaders. Campers are encouraged to show sportsmanship, teamwork, and support for their team mates. They are taught to win with humility and lose with grace. They are a family within the bigger family of camp. They belong to something and they are made to feel like an important member of the team.

The origins of College League go back to the early years of Camp Manitou, where our original program began and from which we formed most of our traditions. I’ve asked around in the years since we started to see if anyone has a clear explanation of how the college element was woven into this summer-long competition. So far, nobody really knows. But here’s how I see it…

To me, the “college” part of College League is about being aspirational. When I was growing up, I visited my mom’s alma mater for homecoming events. We talked about college regularly in our house. It was always assumed I’d go to college and the same was true for every one of my friends. For many of our campers and a large part of our country, that’s not the case. For all of our campers, I see College League as a seed of aspiration. It’s a small way of saying that “college” can be part of their vocabulary, where it might not have been before. At camp, everyone gets to be part of a college team. That won’t necessarily be the path for every camper, but if we can play a small part in breaking down the barrier to opportunity for someone, I think that’s pretty great.

At the end of the day, College League is another way to inspire each person to be their best self. And quite possibly lose their voice in the process.

Learn more about the balance of grief and play at an Experience Camps program.

What’s the Deal with College League?

College League is loud, high-energy, competitive and a great deal of fun. But underneath the face paint and psych moves, there’s much more.

Check Out What a Day at Camp Looks Like

What's it like to spend a day at camp for grieving kids? Find out from an insider.

Celebrations and Reflections from the #BestWeekEver

Let's take a moment to enjoy the big wins of summer 2022!

The [Not so] Calm Before the Storm

Our National Program Manager Jesse is embarking on the journey of a lifetime, to all 5 of our Experience Camps programs.